A few weeks ago, I had the incredible opportunity to travel to Madrid for the 2018 Iberdrola Scholarship award ceremony. The event itself turned out to be quite short, but in that time I had the chance to meet a former journalist and news anchor who just so happens to be the current Queen of Spain. Letizia was actually really cool and came to the cocktail reception after the scholarship event, even though her duties of chairing the event were over. It was at the reception — between the drinks, sushi, meats, and cheeses — that I, a commoner (along with my boyfriend Jason who had been awarded a scholarship earlier), was able to mingle with royalty. While this was obviously a highlight of the trip, it definitely wasn’t the only cool part of it. Madrid is a beautiful and exciting city, so take a look at some of my favorite shots from my long weekend abroad:

This is up there as one of my favorite photos from my trip, even though Letizia’s bodyguard photobombed us. Photobombing aside, how many people can say they’ve taken a selfie with a queen? As my first, and probably only, time meeting royalty, I didn’t know what to expect, but was surprised by how nice she was and that she was willing to take a photo with us. Stories about the event mostly centered around what Queen Letizia was wearing because apparently the dress cost around $20, which was surprising to me given my preconceived notions about what royals wear.

Across the street from a great little restaurant by the name of Tintos y Tapas, I found this little gem. I love the idea of book exchanges, and this one really appealed to me because it was outside of a small café and everything was slightly off-kilter. I really wanted to take a book, but I didn’t have anything besides leftover pizza to leave in its place, so I had to walk away empty-handed. I suppose I could have just taken one anyway since nobody was watching, but I knew that I would have felt bad about it the rest of the day, so I decided against it.

People who know me well know I like a nice drink and an even nicer view. At the Picalagartos Sky Bar, I got both. I was able to enjoy my expertly-made mojito while looking out over the Gran Vía, sometimes called Spanish Broadway (which makes sense since there are quite a few theatres along the way), and suddenly all the walking was worth it. 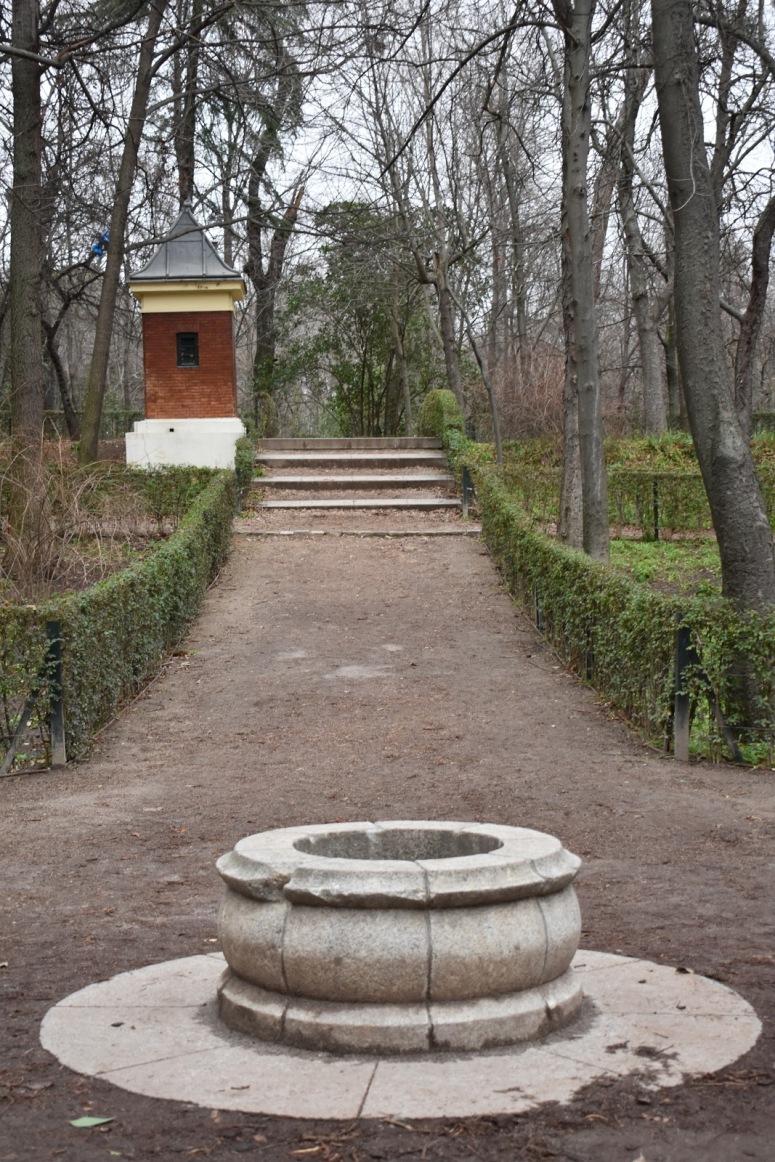 This shot was taken in El Retiro Park which I’m sure looks a lot more lively in the spring and summer months, but looks so cool and abandoned in winter — at least, that’s my opinion. While I was exploring I found a black and white cat running around the park, but he wouldn’t sit still long enough for me to get a good photo of him, so my memory of him will have to suffice.

This art exhibit, housed in what first looked to be a fancy abandoned greenhouse, was kind of hard to understand at first and just looked like a bunch of wire suspended in midair. Only after I wandered around a bit did I start to notice that those wires formed heads and hands that were permanently shushing someone I couldn’t hear.

To get this shot of the back of the Royal Palace and its gardens I had to stick my arms through the gate and sort of hope for the best, because I, of course, was there the one day they were closed to the public. Still, I think it worked out in the end, and I came away with a decent photo.

When you think of Madrid, or Spain in general, what do you picture in your mind? Sangria, meats and cheese? What about an Egyptian temple? On top of a hill, after walking up a few flights of outdoor stairs, you’ll find the Temple of Debod, an ancient temple gifted to Spain in 1968 as a sign of gratitude for saving some other temples. Obviously, the temple was originally built in Egypt, but was later dismantled, brought to Madrid, and rebuilt and opened to the public in 1972. Usually the temple and its arches are surrounded by water, but I guess they drain it in the winter — I think it still looks cool without it, though. 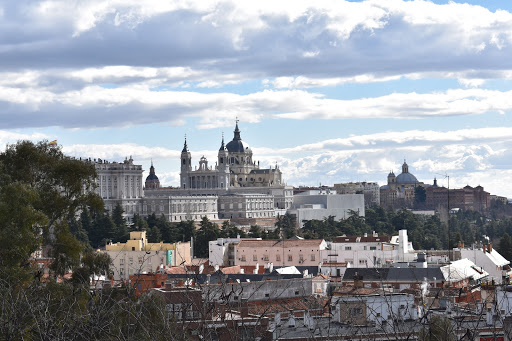 A short walk away from the temple is an awesome overlook with those large metal viewing towers that you can use to get a better look at whatever you want, though you don’t really need them with a view like this. Pictured in the background is the palace again, as well as Almudena Cathedral. 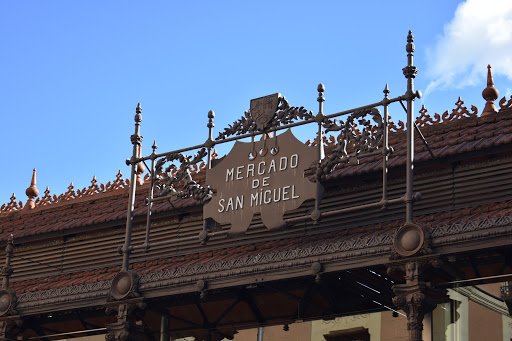 Ah yes, Mercado de San Miguel. This was by far the busiest market I’ve been to in my almost 23 years on this earth — and trust me, I’ve been to plenty. The market is packed with food stalls and people. The best way to successfully conquer the market is go to one stall and order whatever you want, and then eat it while you try to get to the next one. This way you can taste more things without having to carry a lot of food. Try the sangria too, and thank me later.

If I didn’t know better I would think this was a photo from London at first glance thanks to the architecture and the busses in the distance, but one look at the Tinder Sorpresa ad and the police car to the left and there’s no mistaking you’re in Spain. Unfortunately, I don’t remember exactly where in Madrid this is, but it’s a cool city shot all the same.

Here’s another photo taken from the Picalagartos Sky Bar a bit earlier than the other, when the sun was just starting to set and making the whole city glow. I don’t know the names of these streets, but I’m glad they’ve been immortalized…they deserve it.

If you google things to see in Madrid, the bear and the strawberry tree will definitely come up. I know this because I looked up things to do and see around the Spanish capital and on every search, this bear showed up. Located in La Puerta del Sol, this statue, known in Spanish as El Oso y El Madroño, is the official symbol of the city. The symbol isn’t just reflected in this statue though, I also saw it on various manhole covers and randomly around the city — not to mention the many souvenirs depicting it. 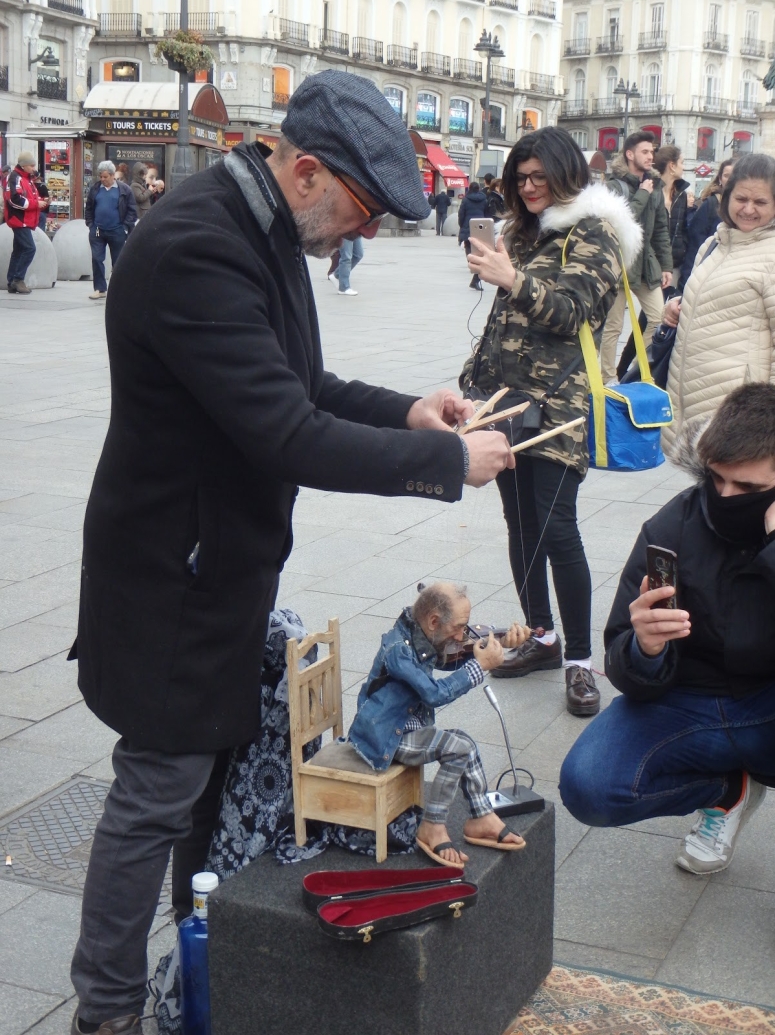 Something you may be able to guess from this photo is that I love street performances. Of the many performers I saw on this day in Puerta del Sol, this man was my absolute favorite. Not only did he bring a marionette that looked just like him, he brought a chair, instrument, and case for his miniature friend as well. The little performer “played” his instrument beautifully, and it’s clear from this photo that I wasn’t the only one enjoying the performance. 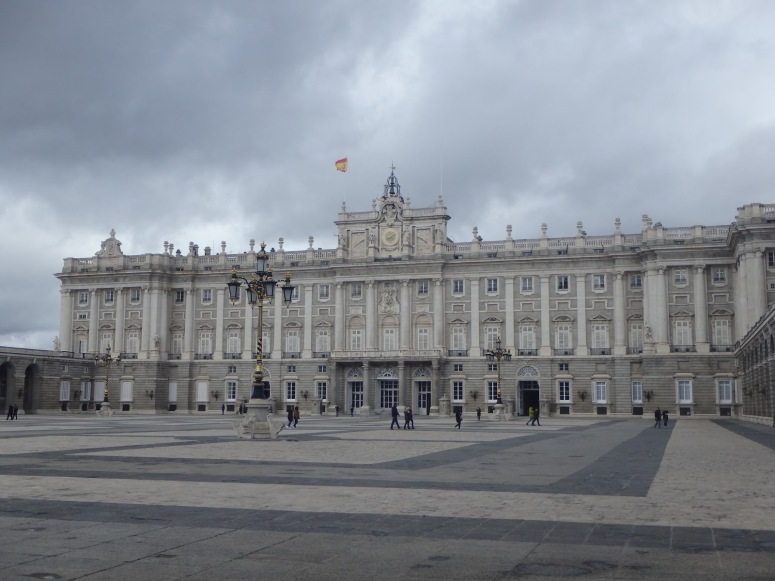 In case you were wondering what the Royal Palace looks like from the front, here it is in all its dramatic glory. If you like the look of the palace exterior, you’d love the richly decorated interior and little attached armory, which features not only armor for adults, but also children and horses. 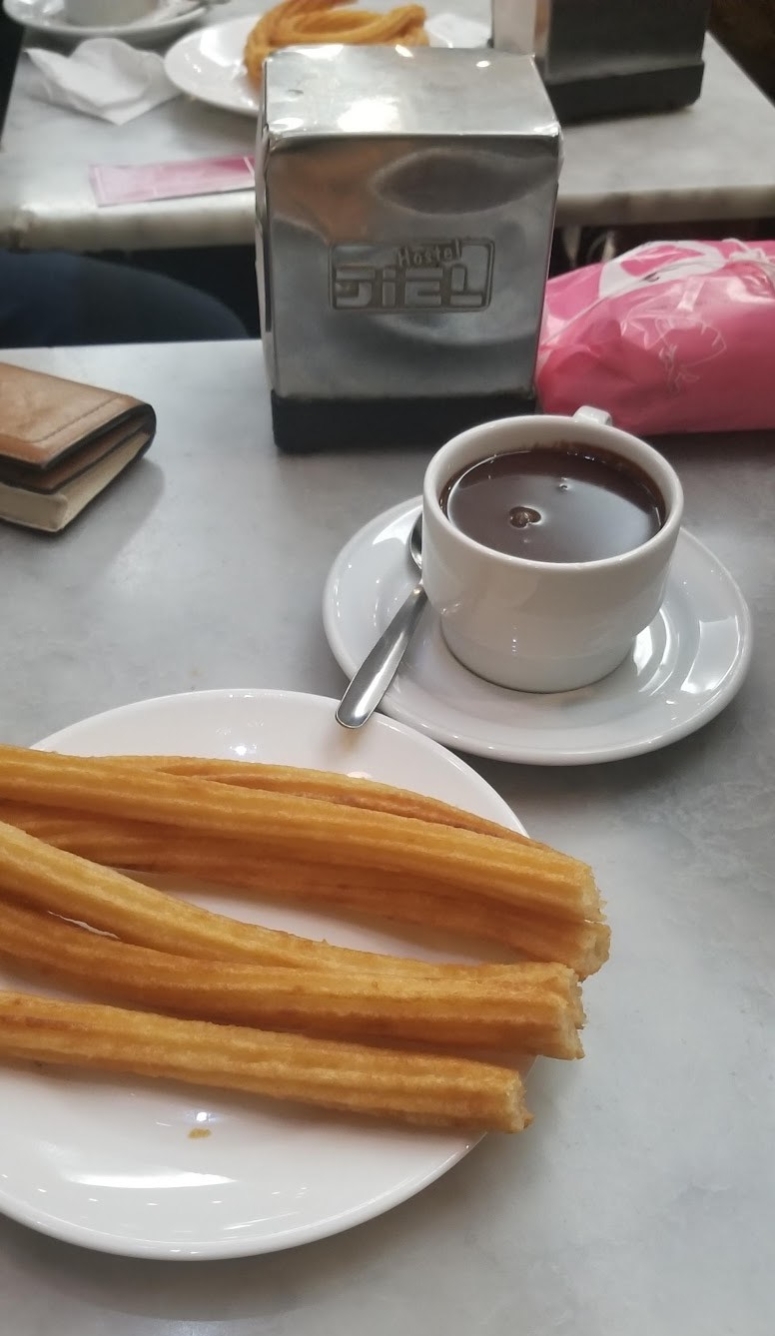 As with every other country where they’re sold, churros are a must. If you’re wandering around Madrid and feel the need for a snack, head to Chocolatería San Ginés; they’re open 24 hours a day! Not only are the churros and warm cups of chocolate amazing, but this particular café has also been serving them since 1894.

Of all the museums in Madrid — and there are a lot, trust me — Museo del Prado is probably the most famous. The national art museum is home to works by influential artists like Bosch, Velázquez and Goya, and is considered one of the greatest art museums in the world. Wear some good walking shoes if you visit because not only is the museum large, it also has multiple levels!

A cultural must while in Spain is attending a flamenco show. At Casa Patas, you can reserve a table for dinner and sit and relax with some great food and wine before heading into the back room for a show you won’t soon forget. While the back room may seem a bit small and the stage even smaller, it can fit a surprising amount of people and the show is well worth it.

While I was in Madrid the taxi drivers were on strike and scheduled many a protest in the main parts of town. Lucky for me, I like to Uber everywhere. I find public demonstrations really interesting, so I obviously had to go see one of these protests for myself, and was pleasantly surprised to find that it was really calm and peaceful. Police were all around just in case, but nothing ever happened to make them come over and break up the demonstrations.

If art isn’t really your thing, but you still want to check out a museum, head to the Museo Arqueológico Nacional on Calle de Serrano. There you’ll find cool artifacts from all over the world like sarcophagi from Egypt, vases from Greece, and tools made by our caveperson ancestors. You could easily get lost here as you travel back in time and explore other cultures.

Last, but definitely not least, is Sobrino de Botín. Founded in 1725, it’s the oldest restaurant in the world according to the Guinness Book of Records. Nestled on Calle de Cuchilleros, the restaurant has great service, food, and drinks — even after all these years. Though they’re famous for their roast-suckling pig as well as their age, I recommend the lamb and some sangria — a match made in heaven. When I went, I was lucky enough to get both dinner and a show when a group of medical students came in and sang/played their guitars for guests.