On the second Monday of October, I participated in the celebration of Indigenous Peoples’ Day – known to some as Columbus Day. However, for indigenous people, it’s a day to celebrate our survival. We want the world to know that despite all that happened to us, we are a strong and resilient people still fighting today. In fact, our fight has become so strong that many of us young indigenous people continue to fight to change the name of C-Day to Indigenous Peoples’ Day. To date, nine cities have been successful. Colleges and universities are following suit. 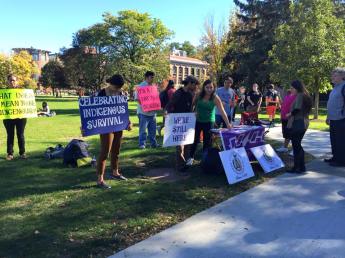 I spent this past Indigenous Peoples’ Day with my indigenous brothers and sisters on the Syracuse University Quad asking people to sign our petition to change the name of the holiday on campus. I spoke with a professor who teaches indigenous music at the university and enthusiastically expressed her love for our culture, especially the music, but she only teaches traditional indigenous music. When I asked her why she doesn’t include contemporary music, she said she can’t find any and it doesn’t exist. I held my tongue, calmed myself, and said, “There’s plenty of it!” I wrote down Revolutions Per Minute, a website full of indigenous artists today, and asked her to look at it.

I do not remember her name. However, that’s not the point. The point is that we as indigenous peoples are still seen as a people of the past. It’s 2015. Friends, family, and colleagues tell me stories of people they’ve encountered in the United States or overseas who think we are extinct. Extinct. As if we are animals. As if we were an endangered species and poof! We disappeared.

I can go on and on about how angry this makes me feel, but instead, I will share with you what I know.

I happen to have a noggin and network full of powerful, talented indigenous artists. I’m also a co-founder of the Survival of the First Voices Festival, an art and media festival for Native American and First Nations youth. From my experience, I got to know many painters, photographers, hip-hop artists, hoop dancers, models, fashion designers, graphic designers, actors, and actresses who radiate with beauty in their respected industries, who work their best to collaborate with one another, and who work their tails off each day for the next Seven Generations. They’ll blow you away.

I can’t name all of the indigenous artists. Heck. I could write a series of posts about Native artists. This list of 15 Native American musicians today is just a starting point.

What I hope you take away is that we are living, breathing people with extraordinary talent. I hope you share this with your network and educate one mind at a time. Let others know we are striving.

I ask you to really listen to the music. It’s not your typical hip-hop, rap, or electronic dance music. It all means something. These songs tell our stories and our fights.

A Tribe Called Red played at the 2015 Coachella festival where they banned all headdresses. If you wore one, you couldn’t attend their performance. This native producer/DJ crew of three – DJ NDN, Bear Witness and 2oolman – create unique club music mixing traditional pow wow vocals and drumming with electronic music. Take a listen to them, you won’t regret it.

Frank Waln is an award-winning Sicangu Lakota hip-hop artist, producer, and performer from the Rosebud Reservation in South Dakota. He received his BA in Audio Arts and Acoustics from Columbia College Chicago. Waln was featured on Buzzfeed’s 12 Native Americans Who Are Making a Difference, USA Today, ESPN, and MTV’s Rebel Music Native America. He is part of the Dream Warriors  Management and Scholarship Program, a management program recently started by himself, Mic Jordan, Tall Paul, and Tanaya Winder.

You can find his music on his website, iTunes, BandCamp, and Soundcloud.

Inez Jasper is an award winning pop artist, speaker, nurse, producer, and sound engineer from Canada. She blends traditional native sounds with pop music that will positively influence your mood. She has won six awards and numerous nominations for the JUNO awards in Canada. Jasper is heavily involved in speaking about the Missing and Murdered Indigenous Women throughout the community.

Supaman is from the Crow Nation in Montana and was featured as MTV’s Artist of the Week in 2014. He wears his regalia while he performs, which is now part of his signature look. MTV filmed a live performance that shows you how he earned that Artist of the Week title.

Mic Jordan (Anishinaabe) is hip-hop artist, speaker, activist, and graphic designer hailing from the Turtle Mountain Reservation. He speaks to youth about the disparities Indian Country struggles with (e.g. alcoholism, suicide, Native mascots, and gun violence) and inspires them to overcome the obstacles. His music video, #DearNativeYouth, promotes a new project him and many other Native artists are working on called The Last Stand Mixtape. Check out more of his work in music and design.

Tall Paul started making rhymes at the age of 14 – and didn’t stop. Now he is part of Dream Warriors Management and his goal is to “make people shed tears of joy and pain, feel that familiar tingle down their spines, and nod their heads with conviction all while experiencing bits of laughter here and there.”

Nataanii Means (Diné/Oglala Lakota/Omaha) is from Chinle, Arizona on the Navajo Reservation. He is part of True Pride Music, a label of many Native artists. His music talks about the hardships of indigenous peoples and speaks about the rights of indigenous peoples, a legacy he is carrying on from his father, Russell Means (a famous Native American activist who passed in 2012).

If you haven’t noticed, the Native artists on the list wear many hats. This is certainly true for Wab Kinew. He’s a father, journalist, speaker, community leader, and heavily involved in academia and politics. He recently published his book, The Reason You Walk.

Spencer Battiest is from the Seminole Nation in Florida and is full of talent. He opened for Aerosmith, Sting, and The Police, and performed in London’s Hyde Park. Before focusing on pop and R&B, he use to sing gospel music and hymns in Miccosukee, Creek, and Choctaw. Watch out for this rising artist!

This duo (Crystle Lightning and MC Redcloud) is a hip-hop group from Los Angeles, California. They work with DJ Hydroe to fuse together gangsta hip-hop and electronic trap music with sounds of the club scene. All three are very talented indigenous artists who are constantly on the road working and speaking. Learn more about them here.

Derek Miller was born on the Six Nations of the Grand River, Mohawk Territory in Canada. He’s a guitarist, singer/songwriter who toured with Buffy Sainte-Marie and has released three albums.

I love these two together. They freestyle it up in the studio of Generation Justice in Albuquerque, New Mexico. Wake Self has a sweet hit called “New Mexico,” the unofficial state anthem along with other moving lyrics here. DJ Young Native spends his time spinning some sweet beats. Check of more of DJ Young Native‘s music on Soundcloud.

Honey, or Rhonda Duvall, is Navajo and an independent R&B artist mixing hip-hop and soul. She performed during half-time at the WNBA Atlanta Dream game and continues to perform across the country.

Scatter Their Own is an “alter-NATIVE” Lakota rock duo from the Pine Ridge Reservation in South Dakota. They speak on many indigenous issues through their music and are deeply invested in spreading knowledge about their Lakota culture.

Last, but not least, The Plateros. This blues rock band is from Tohajiilee, New Mexico on the Navajo Nation. They describe their sound as “a style like Stevie Ray Vaughan.”

BONUS: I could not leave out one well-respected artist who was a hit many years ago and still touches the hearts of people across Native America. I remember the first time I fell in love with Litefoot. I was 9 and my mom listened to his CD in her green Toyota truck. His song, “My Land,” was my first taste of activism. He recently released a new music video called “Pop.”

I believe as a journalist, I am an educator as well, so I included another song from MTV’s Rebel Music: Native America featuring Frank Waln, Nataanii Means, Inez Jasper, and Mike Cliff called “The Revolution.” It sends chills down my spine. 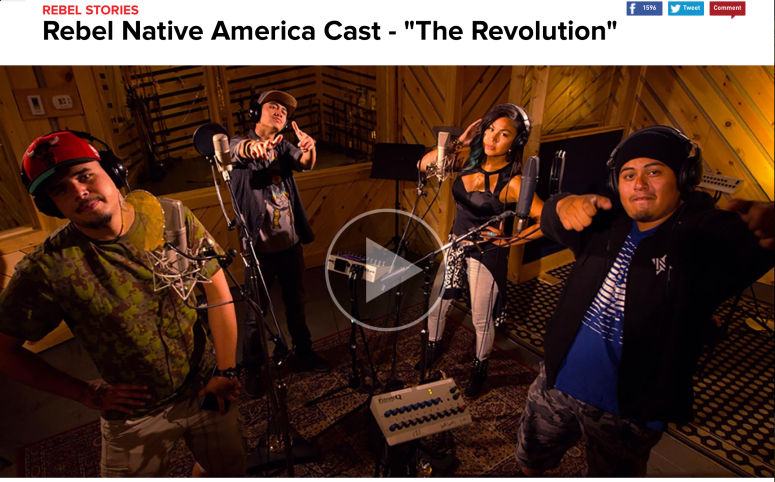 Here is the episode from MTV. Enjoy!

You can use this list of music awards and resources to find more contemporary Native American music.